All original content © 2011-2014. Photos and Text, unless otherwise stated, are by the author of Pork Bier Belly. If you want to use images or writing, please ask for permission prior to using. 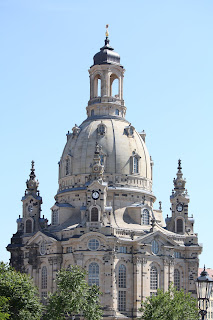 We traveled to Dresden for a long weekend in June. The weather in Nürnberg was hot and uncomfortable, without air conditioning that is, so we decided traveling will make the heat seem less unbearable. It was good to get away to a new city that wasn't enduring a heat wave. Dresden is approximately 4 hours from here by the Regional (RE) train. We haven’t used ICE (fast train) except traveling to and from Frankfurt for an international flight. A reason for taking the RE was due to Schönes Wochenende (Beautiful Weekend) Ticket. This ticket allows passengers (up to 5 people) to travel outside of their state on certain days for 39 Euros. For traveling to Dresden, 4 hours away, we found this to be a deal worth trying. 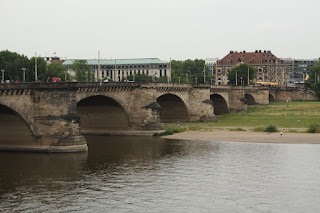 Dresden is in Saxony and sits on the Elbe river. An important note of the Baroque-style architecture before and post war is its a shade of black. This is the cause of sandstone. Sandstone quarries are located East of the city and a lot of the architecture is build from sandstone. Sandstone, as I did not know and learned, darkens as it ages so the pictures show the darkened facade.

On the night of February 12th and into the morning of 13th 1945, Dresden’s downtown district and some areas surrounding were completely destroyed from Allied bombings. Post WWII, GDR (German Democratic Republic) assisted in rebuilding parts of the city. Some buildings like the Semper Opera, reconstructed as the original, and Zwinger Palace were rebuilt in Post War Era. The Semper Opera is renown and sells 95% of its seats in high season. For the seats that are unsold 30 minutes prior to a show the box-office sells tickets for 10 Euros to students. (Bring your student ID cards.) We saw Tito on the Saturday night. It was our first opera and we were notably surprised. Tito was done in Italian and had German subtitles on the overhead for those that wanted to follow along in a familiar language. Unfortunately for us, we were working with broken German and no Italian so although understandable it was harder to follow. For our next show, we’d prefer an English subtitle. Due to lack of available funding in GDR, everything wasn’t rebuilt post war. For instance, the Frauenkirche (Our lady of peace) was rebuilt after the reunification in 1990.

Along with few other museums and churches, we visited the Green Vault in the Zwinger Palace and were surprised with its pieces. We knew it was filled with extravagant ornaments but to our surprise there were also other things inside. The Green Vault has 9 rooms and each room is filled with articles made from different expensive material (Gold, Ivory, White Silver, Bronze). For instance, some of the contents of the white silver room were wine glasses and serving platters, while another room was filled with bronze statutes. Many of these survived the bombings however some did not and therefore are replicas of the original. For the in depth experience, I highly recommend a visit to the Green Vault.

Without sounding too boring and long-winded with history, Dresden was a lively city pre-war and even as early as 18th century. August the Strong was the Elector of Saxony in 18th century and had high hopes of becoming the King of Poland (next door neighbor). And since Poland’s nearby, it’s not a farfetched aspiration, right? The only problem was August the Strong was Protestant, as was most of the population of Dresden. To obtain the kingship, August the Strong converted to Catholicism and eventually earned the title of King of Poland. He recommended the citizens of Dresden keep their faith and even today the city’s population continues to be mostly Protestant.

What made Dresden a haven for artists was August the Strong’s love of art and his mission to attract artists to the city and allowing them to express their individuality in art form. Many relocated to Dresden and called it their home. That vibe continued to live on until 1945. And like any artistic city that bounces back from its past, Dresden feels like a city that survived a major event and has resurfaced as a creative outlet. While we were visiting there was the Bunte Republik Neustadt (Colorful Republic of New City). 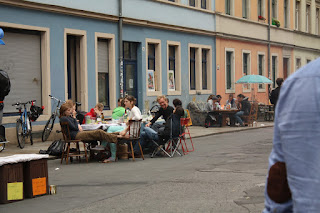 It was the city’s residents celebrating with neighbors, friends and family on closed-off streets. We were amazed by the number of card tables/dining room tables surrounded by people coming together to share a meal. We have never seen anything like this but were happy to witness the communal breaking of bread and storytelling. Additionally, there were children’s game corner, bake sales, stages for music, food vendors, a family selling crepes and waffles from their 1st floor living room window. In simple words a lot of uniqueness.

Onto the important part of any trip- the food and drink. We were hoping to find local, Saxon food in Dresden and were shocked in the searches. There were couple restaurants that were highly regarded as local however we were not able to go due to our schedule and point of area at mealtimes. From a tour guide we were directed to a restaurant that was in her words ‘as local as Saxon food gets’, only to find out it was an all vegetarian restaurant. Although the food was overall good, it wasn’t what we were looking for. Even our server at that restaurant laughed when we asked for Saxon recommendations on the menu because they didn’t have any. Dresden has its own bier, of course. We tried a bier called Dresden Felsenkeller as well as the famous Radeberger Pilsner. Hands down the keller bier won our votes. Although overall this trip was memorable and Dresden is a great city to visit, I was let down in the food options. 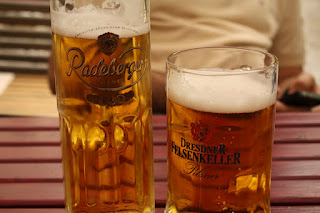 Finally, our Bed & Breakfast is worth noting and sharing. We stayed at Villa Sommerschuh for 2 nights and were pleased with the service, price and the room. The villa is 2 stops (on Tram) from Hauptbahnhof and yet in a secluded residential neighborhood. We found it without any trouble, settled into our room and told the host, by phone, of our breakfast requirements. The following two mornings we were treated like the King and Queen of Dresden Poland for breakfast. It came with orange juice, freshly brewed coffee (a carafe), rolls of fresh bread, cold meats, fruit, yogurt and granola, enough food to last us until mid afternoon. The best part of this Villa is the large backyard it has to relish the morning sun. We were surrounded by berry and pomegranate trees, comfortable in the environment, enjoying breakfast like it should be.

Email ThisBlogThis!Share to TwitterShare to FacebookShare to Pinterest
Labels: travel